How do large-scale sites and applications remain SQL-based? is a recent article from Michael Rys (Blog|Twitter) that highlights the relational SQL Server based web-scale deployment at MySpace. I have talked before about how MySpace uses Service Broker as a reliable messaging backbone to power the communications between +1000 databases, allowing them to scale-out and partition the user information into individual shards. Here are some more details about this architecture:

This new article uses the MySpace deployment as a case study to counter balance the claim that large web-scale deployments require the use of NoSQL storage because relational database cannot scale. BTW I know the SQL vs. NoSQL discussion is more subtle, but I won’t enter into details here. I think a good read on thattopic is NoSQL vs. RDBMS: Let the flames begin!.

Why is reliable messaging a key tenet of implementing a data-partitioned scale-out application? Consider a typical example of an modern web-scale application: users connect, get authenticated and view their own profile, but they are also interested in the status updates or wall messages from their network of friends or followers. It is easy to see how one partitions the user profile data, but how do you partition the user ‘walls’? User A is in a partition hosted on node 1, while user B is in a partition hosted by node 2, when User A update his status, how does this show up on User B’s wall?

Another option is to have the application read the status from User A when displaying the wall of User B. This also doesn’t scale, because reads now occur on many nodes. All those Lady GaGa followers refreshing their wall page have to read from the one node hosting her status, and the node is soon overwhelmed.

A solution is to replicate the write on User A’s status onto User B’s wall. The application only updates the User A status, and the infrastructure propagates the this update to User B’s wall. 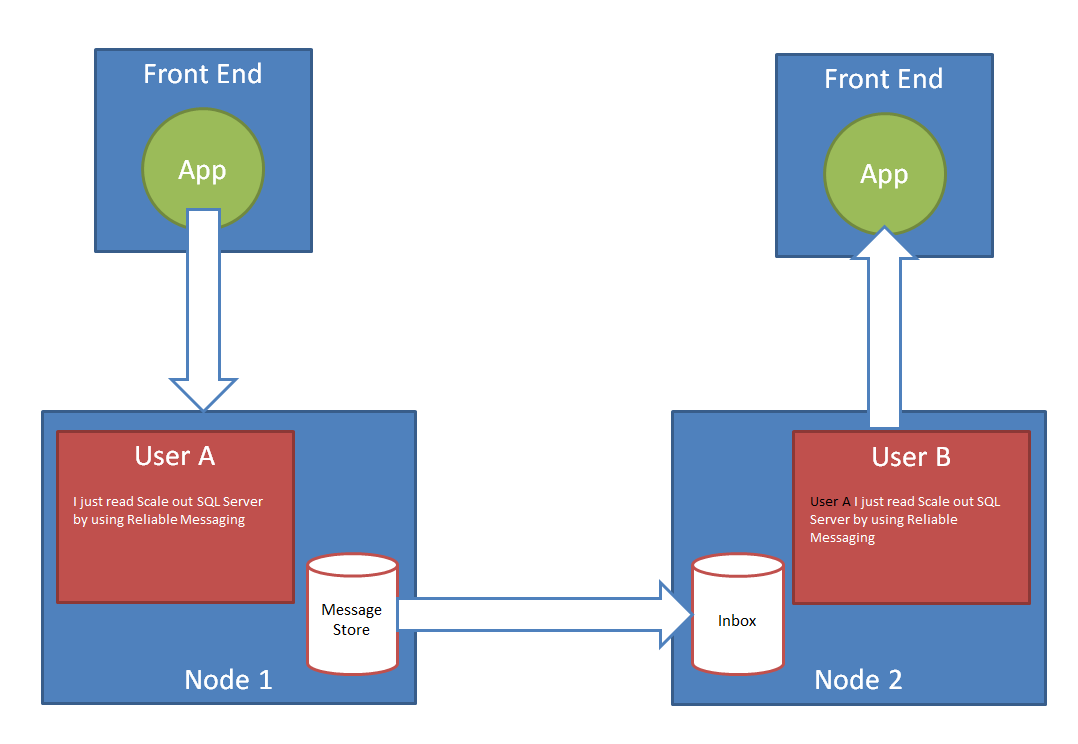 But traditional replication was historically designed for replicating entire data sets of fixed schema over static topologies, and it falls short of replicating web-scale deployments of hundreds and thousands of nodes:

Messaging is designed with application-to-application communication in mind and has different semantics that are more friendly on large scale-out deployments:

With messaging in place the application updates the status of User A and the drops a message into a local outbound queue to notify all friends of A. The reliable messaging infrastructure dispatches this message to all nodes interested and processing of this message results in an update of User B wall. MySpace uses Service Broker as the reliable messaging infrastructure, and they make up for the lack of publish/subscribe by adding a router-dispatcher unit: all messages are sent to this dispatcher and the dispatcher in turn figures out how many subscribers have to be notified, and sends individual messages to them. See the slides linked at the beginning of my post for more details. As a side note, I see that StackExchange is also embarking on the route of creating a message bus for their pub/sub infrastructure, but they use Redis as a message store, see asyncRedis await BookSleeve.

Robert Scoble had a post MySpace’s death spiral: insiders say it’s due to bets on Los Angeles and Microsofton which it claims that MySpace insiders blame their loss to Facebook to, amongst other things, the complexity of this infrastructure:

Workers inside MySpace tell me that this infrastructure, which they say has “hundreds of hacks to make it scale that no one wants to touch” is hamstringing their ability to really compete.

I do no know if the sources quoted by the article are right or wrong, and I was never personally involved with the MySpace deployment, but since I was so closely involved in building SQL Service Broker and as SSB is one of the critical components used by MySpace infrastructure, I am understandably interested in this discussion. Service Broker has a notoriously steep learning curve, there are no tools for administer, monitor and troubleshoot Service Broker deployments, and there is absolutely no support in the client programming stack (the managed .Net Framework). This is why all solutions that deploy Service Broker that I know of are large enterprise shops that are staffed with architects that understand the set of unique advantages this technology brings, and are willing to venture into uncharted waters despite the prospect of being impossible to hire development and ops talent with Service Broker expertise. But also the feedback I hear from these deployments is almost always positive: once deployed, Service Broker just works. Someone told me that the Service Broker solution they had was the only piece of technology that “did not break in the last 3 years” and that covers an upgrade from SQL Server 2005 to SQL Server 2008. See Is Service Broker in SQL Server 2008 compatible with the one in SQL Server 2005? to see how Service Broker helps address infrastructure upgrade problems. Personally I am not surprised that Service Broker turns out to be a cornerstone of the response SQL Server has to give to the NoSQL challenge, but this vitally unheard of technology (89 questions tagged service-broker on StackOverflow at time of writing this) will be quite a surprise answer for many